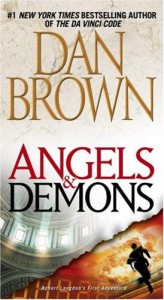 I had read "The DaVinci Code" a very long time ago, around the time the movie came out. I recently found this book and used the audio to help me get through the book quickly ("reading" in the car or while knitting).

I was a bit shocked to learn that this was Robert Langdon's book #1. He is called to Cern to help find what had been stolen from the Cern in Switzerland and where it had been taken and who had taken it.

A scientist was tortured and murdered and his work was stolen and taken to the Vatican where it was used as a threat to destroy the Catholic Church, just as the Church once tried to destroy the Illuminati.

He uses his knowledge of the Illuminati to find out where the kidnapped Cardinals are going to be found and how they would be murdered. He tries very hard to stop these murders and tries to save the scientist's daughter and partner from being murdered by her captor.

It was an interesting story, that I was glad that I could use the audio with the book in order to find more time to read. This is a story that provided some interesting information about the Cern and the Vatican. I do recommend that this book not be listened to around children unless they can handle the harsh murder descriptions. This limited the time that I could listen (before children woke up and after they went to bed and when I was alone in the car).